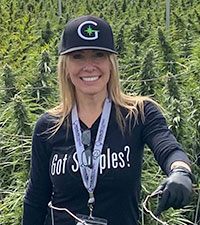 Christi McAdams has been a marijuana establishment license owner in the United States since 2014. She joined the industry by founding a production lab in Southern California which produced award winning concentrates. Only 1 year later she partnered on the 17th licensed production lab in Nevada where she developed an artisan brand of concentrates, High Standard. When recreational cannabis use was legalized, the state was requiring 3rd party distributors to provide the service so McAdams founded one of Nevada’s largest distribution companies, Focus Distribution. While CEO at Focus McAdams also founded four cannabis ancillary companies including Highlite Staffing, a staffing agency focused on cultivation facilities, production labs and cannabis kitchens. McAdams is the Board of Directors of Cannabis Community College and the Global Cannabis Industry Networking Group where she works with cannabis ambassadors from at least 25 countries regarding various industry topics to share with industry enthusiasts on webinars each month.