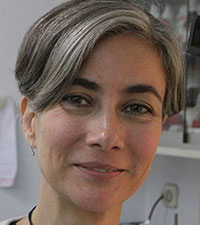 Cristina Sánchez is an Associate Professor of Biochemistry and Molecular Biology at the School of Biological Sciences at Complutense University of Madrid (Spain). After graduating in Biology in 1994, she completed her Doctoral Thesis under the direction of Dr. Manuel Guzmán, focused on the study of the effect of cannabinoids on energy metabolism first and cell proliferation later. After obtaining her PhD in 2000, she did a 3-year postdoctoral stay at the University of California, Irvine, after which she returned to Spain. Since 2004 she has directed his own research group at Complutense University, aiming to understand the role of the endocannabinoid system in breast cancer, and to exploit this knowledge to provide new targets and therapeutic options for the treatment of this pathology, as well as new patient screening tools (with prognostic and predictive capacity). Cristina is currently Vice President of the Spanish Cannabinoid Research Society, Secretary and founding member of the Spanish Observatory of Medicinal Cannabis and Vice Dean of Research of the School of Biological Sciences at Complutense University.