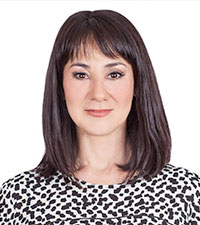 Entertainment journalist and television host. Mónica has university studies of Letters and French Civilization in Mexico and France and studied the Bachelor of Latin American Studies at the Faculty of Philosophy and Letters at UNAM.

She was the main host of the entertainment news program «En Medio del Espectáculo» and information coordinator for the program «Caiga que Caiga». She has been in charge of conducting other special broadcasts such as the delivery of the Oscars, the wedding of Prince Edward of England, «The Academy 5» and the Concert for Peace among others.

Mónica has also been the host of «Historias Engarzadas» and «Hechos A.M.» through TV Azteca. She is currently the host of the morning newscast “De Mañana” on ADN 40, and the first news anchor to open the door to cannabis on national television through a special section in her newscast called “Tiempo de Cannabis”.