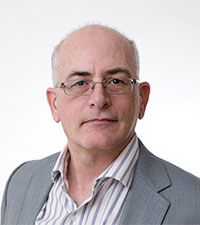 Shlomo was born and raised in Jerusalem, Israel and has graduated from the Horticulture program at the JTI (Jerusalem Technological Institute). After working as a grower for several years, with some of the leading Agriculture companies in Israel, Shlomo accepted an offer and travelled to Australia to manage a large operation of cut flowers. During the same period, he was also involved in an IPM research project led by the University of Sydney. When the project in Australia ended, Shlomo moved to Portugal, to manage another large-scale project (24 hectares) where he built exceptionally large and modern greenhouses, designed to produce several millions young plants per season for the export market. After 10 years in Portugal, in 2002, Shlomo immigrated with his family to Canada and worked as a Head Grower, initially in B.C. and more recently in Ontario, with some of the leading producers of young plants in the industry.

Since 2014, Shlomo has worked with a number of the largest L.P.s’ in Canada, where he worked as a master grower, assisted in maximising production as well as sharing the “know how” involved in growing successfully on a commercial scale, while complying with Health Canada regulations. In parallel, Shlomo has been providing consulting services to several LPs in the process of acquiring a growing license from Health Canada.

Shlomo has also been working closely with the leading Medicinal Cannabis growers, researchers & scientists in Israel, to produce exclusive specific medicinal strains. He is currently engaged in several international cannabis cultivation projects, providing guidance on G.A.C.P. compliant Medical cannabis cultivation, namely in Colombia, Greece, Macedonia, Portugal, Spain, Zimbabwe, Barbados and Australia. With more than 30 years of experience working with profitable large-scale commercial operations, and his unique familiarity with the Cannabis industry in both Canada, Israel (both leading Cannabis producing countries) and South America; he is an asset in this industry.